In my wild, wacky world of Words with Friends (you know, that game that I was going to conscientiously prevent from becoming an addiction? Yeah, I can quit any time I want to…), my winning % is… around 85% or so. A few days ago, I had a disasterous day – lost three different games in a row, and so I went on a rampage (I congratulated one of the people who beat me and told them I was sorry, but now I would have to KEEL him. Hey, don’t be surprised – I’ve told ya’ll, I have these overdeveloped competitive urges. And I’m Sicilian.) Anyway, I’m on this rampage, beating the begeebers (how do you spell that?) out of everyone. Proud of myself that I’ve upped my game, which is a lot more satisfying than kicking myself for malingering.

It’s widely accepted that we only use X% of our brain (I would state an actual number, but it is apparently NOT widely accepted what that number is.) In polite society (the society that believes politeness means never being responsible), this reduced use of gray matter is attributed to our simply not being able to access it all. People try to sell us pills or foods or mind tricks to help increase the percentage available to us.

But there isn’t some magic pill that unlocks this potential, because the real problem is that most of the time we don’t APPLY ourselves 100% to a task (except athletes of course, who seem to be capable of perpetually exceeding the 100% ceiling and giving 110%, 120%, 150% – there seem to be no limits to the possibilities. Maybe they only teach the new math in college. Limitless…like on Limitless.)

Don’t be silly, Bill – we do have limits. But they’re not merely reflected in the percentage of the brain we CAN use, but in how much we CHOOSE to use. In Limitless, an aimless character who can suddenly use everything in his brain is not going to automatically become ambitious or driven, any more than a slob becomes organized by making a trip to The Container Store (I know it doesn’t change me – just neatens or hides the mess so I can make more.)

We tell ourselves we’re giving our best effort, and yet, when it comes to crunch time, we somehow manage to dig down deep and find something MORE that we weren’t using before. How can that be?

I was complaining to someone yesterday about how I don’t think I’d do well going back to school at my age – that I just don’t seem to be able to FOCUS anymore. They said I was wrong – they’ve watched me, and I’m perfectly capable of focusing – IF I WANT TO. The biggest thing, as always, that determines what percentage you’re REALLY giving, is how much you WANT it – if there’s no passion, you’re never going to give your 110%.

How about you – do you kid yourself, too?

You have to be on your guard for when you let things slip – when you catch myself NOT REALLY giving your all to what you’re doing. As soon as you tell yourself that NOW is when you’re going to put the pedal to the metal, that’s a sure sign that you haven’t been (and if you were fooling yourself then, what about now?)

If we were REALLY giving it our all, how much better would the results be? 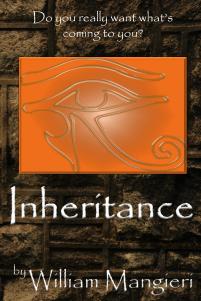 This week’s Smashwords coupon is for “Inheritance”:

When Amun discovers that his family is connected to power, wealth and infamy, he enlists a friend to help him get his share. But does he really want the ancient inheritance that’s coming to him?

This is a sci-fi/fantasy short story in which I play around a little with grave-robbing, Ancient Egyptian mores, and the usual mind control. In North America. Use coupon code ZW92V to get 67% off the cover price at Smashwords (that’s only 99-cents – such a deal!) – it’s good until March 19th. Here’s the link:

“Inheritance” is also available in my second collection, aptly titled: More Things I Could Get OUT OF MY MIND.

William Mangieri’s writing, including his latest ePub “The Pipes”, can be found in many places, including:

One thought on “Meandering Monday about Malingering”