Every once in a while, I used to wonder what would happen to the human race if things went dystopic. How could we wind up there? There is no shortage of ways that we could be hit with the end of life as we know it. In my teens, the disaster would be from nuclear war. Later, it was some sort of biological epidemic. Movies have the earth hit by meteors and comets, invaded by aliens, drowned in rising seas as the ice-caps melt, frozen solid, the earth’s core stopped or the poles shifted, pollution making the planet unlivable.

We are a compassionate species – we prefer not to let our fellow humans die if we can prevent it, and so we protect the sick and the weak, and try to make it easier for them to survive. There are tons of people who would die from drinking non-pasteurized milk. I can guarantee you that when the zombie apocalypse comes, they won’t be pasteurizing milk. They probably won’t even wash their hands.

Imagine if we found a way to create a perfect food for people – ZERO – that has nothing in it that our body can’t use, so we produce no waste. Our digestive tracts would become relatively useless in handling waste. After a couple of generations, would we be able to survive going back to natural food? (Because those lazy zombies can’t be relied on to produce any more ZERO, either.)

There are some things that we have a little control over, but no way to guarantee that we can keep mankind from being wiped out, or knocked back to the stone-age. So why do we just sit here and wait for it to happen?

It’s funny how we have behaviors we are told to engage in, on an individual or family level. Make sure you don’t have a dangerous situation in your house. Have properly maintained and safely stored firearms on hand. Lock your doors. Have an escape route planned out in the event of a fire.

Why don’t we have our escape route for if (or when) the Earth catches fire? We have a duty to humanity to figure out how to get a portion of our population off of this rock, so if any extinction-level calamity happens here, human beings will still survive on however many colonies we can spread out to.

This week’s Smashwords coupon is for “The Wolves Will Come”:

How will you answer when they are at your door?

The Tribe is leaving their world for a new home, but Bear is too old to make the journey. It is of no real consequence – neither is it in him to run from his enemies, nor to abandon his heart’s home. It’s just a matter of time before the Exiled find him – or will age and the wolves get to him first?

The expression “The Wolves Will Come” was supposed to be a negative and represent a danger; colonists are on the run from their enemies, and they are forced to leave their home and their elderly behind. I wanted the elder to be abandoned by necessity, but proudly, not as a victim. It wasn’t until I started writing that the tribal, pseudo Native American flavor seeped into it, and from there the wolves came. It seemed natural that the wolf in his solitude would have a commonality with the old man that the two didn’t share with their own kind, and that they would bond.

“The Wolves Will Come” is also available in the collection – And Yet Still Even More Things I Could Get OUT OF MY MIND. 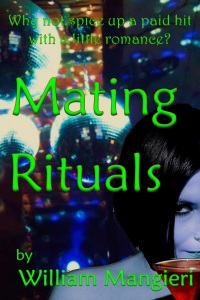 Up next for publication: “Mating Rituals”

It’s been so long…

Manti has only one night left on Cuniculus before she returns to Cesilli – why not spice up a paid hit with a little romance?

“Mating Rituals” is a very short, speculative fiction that came to me out of nowhere (well, I heard Manti beginning her monologue inside my head, so I guess that’s where it actually came from. There are SO MANY voices running around in there…) The release date is July 1st, but you can preorder now at a REDUCED PROMOTIONAL PRICE at all the usual places, including (but not limited to):

William Mangieri’s writing, including his latest Publication More, And Yet Still Even More Things I Could Get OUT OF MY MIND, can be found in many places, including: