Well, he did it: Donald J. Trump will be the 45th President of the United States, and the first one who didn’t serve in the military or hold elected office. That last distinction may have been the main point of his win; in a time when most politicians are assumed to be corrupt, and his opponent was the poster-child for such. The “deplorable” peasants have revolted, and the ruling (political) class is wringing their hands.

I remember when the Dems ran their daisy and nuke commercial during the run-up to the 1980 election, as they tried to scare voters into thinking that Reagan would start a nuclear war if elected. Reagan won, but I don’t remember massive protests in the streets of people fearing for the END OF DAYS (I did know one person who went into a depression about it, but he had coping problems, anyway; I think that was over by the inauguration.)

Unfortunately, we’re now seeing massive numbers of people in a panic, essentially about a lot of misleading campaign ads. Are there really that many people who can’t deal RATIONALLY with disappointment. Or is it just that they’re being herded into a panic my more misleading campaign ads? I wonder if the DOJ will look into who’s funding this?

When (now President-Elect) Trump was asked in the last debate if he would accept the results of the election and refused to guarantee he would, it was hype-painted as a devastating blow to the peaceful transfer of power in this country. Now what are we seeing? The hypesters are now in the streets, denying the results, threatening (and perpetrating) violence because they didn’t get their way. Seems a bit hypocritical to me.

“L-O-V-E Among the Stars” can now be preordered.

A space traveler wakes too soon, and must leave the woman of his dreams to the ministrations of another, less-human caretaker.

“L-O-V-E Among the Stars” is a speculative fiction of (with hints of a pop standard.) The release date is November 18th, and you can preorder now at the usual places, including (but not limited to) Smashwords: 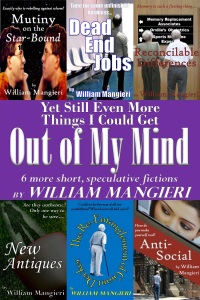 This week’s Smashwords coupon is for Yet Still Even More Things I Could Get OUT OF MY MIND – my fifth short story collection, which contains the following:

“Mutiny on the Star-Bound”

A night at a carnival takes an odd turn for Martin Henshaw, a humble digital mechanic who is tricked into a job with Transgalaxian, tending cybers far from home. But when he finds himself in the middle of a mutiny on the Star-Bound, Martin begins to wonder: who’s rebelling against whom?

Madeline doesn’t have much hope for her forty-six-year marriage; Carl just refuses to remember what ‘s important. What hope could there be, with all the irreconcilable differences in the way they each see things? Maybe Memory Replacement Therapy holds the answer.

Tim Crabtree takes time out of his daily harassment by the local bullies to wonder why his new neighbors have built a forty-foot pole in their backyard. Are they trying to get hit by lightning? If he only knew…

Bryan Riggins doesn’t know how long he’s been drifting around, but he needs a change, and finds himself waiting in line for a job interview. But what waits for him behind that door?

“The Re-Entanglement of Grant Decker”

Are we simply the sum of the choices we’ve made? What happened to all the other possibilities? Grant can’t keep his reality in focus, and he doesn’t know whether his life is coming apart or coming together. He’s never been one to talk to himself, but maybe it’s time.

A homebody struggles to break social conventions and reach out into a world that’s becoming less and less substantial. How do you make yourself real?

Use coupon code HG52B to get an additional 67% off the newly reduced cover price at Smashwords (that’s only 99-cents – such a deal!) – it’s good until October 29th. Here’s the link:

William Mangieri’s writing, including his most recent publication “Hard Times”, can be found in many places, including:
• Smashwords: https://www.smashwords.com/profile/view/NoTimeToThink
• Barnes & Noble: http://www.barnesandnoble.com/s/william-mangieri?store=book&keyword=william+mangieri
• Createspace (if you prefer physical books): https://www.createspace.com/pub/simplesitesearch.search.do?sitesearch_query=william+mangieri&sitesearch_type=STORE
To CONNECT WITH HIM (and LIKE and FOLLOW), go to
• His site on WordPress: https://williammangieri.wordpress.com
• “William Mangieri’s Writing Page” on Facebook at: http://www.facebook.com/NoTimeToThink
• His Goodreads author page: http://www.goodreads.com/author/show/6893616.William_Mangieri
• Or on twitter: @WilliaMangieri