I am NOT a member of one of the zombie generations; in my day, the undead of choice were vampires. Not the silly, sparkly ones in the fairly recent teen angst versions, but the pale, sophisticated, highly educated vampires of the Bela Lugosi / Louis Jordan / Gary Oldman mold (even the Jack Palance vampire, as brutish as it was, still had a cultured air.) Vampires could be deceptively charming (they had to be, since they also had restrictive codes of conduct; they couldn’t just barge into your home – you had to invite them in), but ultimately they were evil. There was generally no ambiguity about this; sparkly kin aside, vampires were up to no good.

Zombies are of ambiguous morals. They wander around as a brainless (though hungry for them) mob. There is no right or wrong with zombies – they just ARE.

My wife has asked me several times WHAT’S WITH THE ZOMBIE CRAZE? (she is also of the vampire generation.) I think zombies go along with the whole “non-judgmental society” that the later generations have been brought up on (you shouldn’t tell anyone they’re doing something wrong – you’ll hurt their feelings) coupled with an aimlessness (just wandering around with no real goals or future) and a denial of the distinction of the individual vs. the demographic (they are just a mob, and WE know how THEY ALL are, don’t we?)

Sounds like a sad commentary on the young, doesn’t it? Of course, maybe there’s hope in those sparkly vampires. 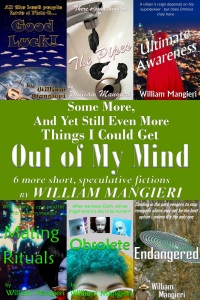 Next up for publication: Some More, And Yet Still Even More Things I Could Get OUT OF MY MIND (short story collection #8); includes:

“The Pipes”:  Sometimes it’s the little things… An unexpected extraterrestrial visitation has an adverse effect on a Texas farmer’s well. Think twice before you drink the water – there’s something in the pipes.

“Good Luck!”:  Sometimes the best laid plans don’t quite work out. With the Zavian Empire bearing down on Earth, The Chairman gives a final speech on the value of having a Plan B.

“Ultimate Awareness”:  Omnius has relied on his Ultimate Awareness to dominate the city as well as any supervillain could, but an interview with a prospective sidekick casts doubt on both his own limits and his career path. How much does he really know?

“Mating Rituals”:  It’s been so long… Manti has only one night left on Cuniculus before she returns to Cesilli – why not spice up a paid hit with a little romance?

“Obsolete”:  When we leave Earth, will we forget what it’s like to be human? Mr. Omega, the last unmodified “man”, stands trial for unthinkingly preserving his own life over that of a superior being.

“Endangered”:  Aliens create Hell on Earth in a plan to put Humanity on the endangered list. Sending in the park rangers to stop them may not be the best option – unless it’s the only one. Sometimes the best laid plans can be derailed by the smallest of things.

The release date is December 16th, but you can preorder until then for the reduced promotional price of only 99-cents for another 4 days (such a deal!) at the usual places, including:

William Mangieri’s writing, including his most recent publication “L-O-V-E Among the 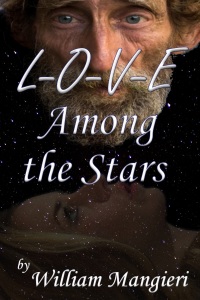 Stars”, can be found in many places, including:
• Smashwords:  https://www.smashwords.com/profile/view/NoTimeToThink
• Barnes & Noble:  http://www.barnesandnoble.com/s/william-mangieri?store=book&keyword=william+mangieri
• Createspace (if you prefer physical books):  https://www.createspace.com/pub/simplesitesearch.search.do?sitesearch_query=william+mangieri&sitesearch_type=STORE
To CONNECT WITH HIM (and LIKE and FOLLOW), go to
• His site on WordPress:  https://williammangieri.wordpress.com
• “William Mangieri’s Writing Page” on Facebook at:  http://www.facebook.com/NoTimeToThink
• His Goodreads author page:  http://www.goodreads.com/author/show/6893616.William_Mangieri
• Or on twitter: @WilliaMangieri