America is a nation of laws – that’s been our basic value has been since our founding. The law is blind, and supposed to apply to everyone.

The law in a gaming environment is the rules. These rules are agreed on before the game starts, and these are the rules you play by until the game is over. A cheater is someone who thinks that the ends (winning) justifies the means (breaking the rules.) I wonder how cheating is viewed in other cultures outside the U.S., where equality under the law isn’t the norm. Is cheating something that’s just accepted as part of life – that maybe the rules don’t matter, or don’t apply to everyone equally?

When Vince Lombardi said “Winning isn’t everything – it’s the only thing”, I believe that was meant in the context of playing by the rules. It’s ingrained enough in society (or was) that it wasn’t necessary to qualify the statement.

What is a game changer? It isn’t something that affects the RESULTS after the game is over. We don’t change rules retroactively – they apply to the next time we play. We win by obeying the rules as they exist at the time we play.

The rules are there to guide us – to limit us, and even sometimes to help us. I used to wargame, and one of my strengths as a player was an ability to analyze rules and take advantage of little quirks in them that other people didn’t notice. Usually, it was something the game designers hadn’t intended.

I’m sure if the designers had seen what I did to their game, they would change it – revise the rules to be prevent me from approaching the game in a way they didn’t like.

Sometimes a player comes along who is so good they’re a game-changer. The rules are changed to make it easier for his opponents to compete. We like our games to be interesting, and it’s boring to watch blowouts – we’d rather that it all came down to the last play – the last few seconds. We don’t like to see someone pounded into the dirt the entire time, and we are (at least I am) prone to rooting for the underdog to make a good show of it.

Of course, there are written rules, and then there’s the culture. Sometimes we create house rules – they’re not the official game rules, just something we agree to in a particular setting to make the flavor of the game more to the group’s (or host’s) liking.

Looking at the last election, a lot was made of the idea of acting presidential – particularly that Donald Trump was incapable of it. There is no law that says a President can’t be rude or insulting, but it was a major thrust of the Clinton campaign, and they thought they could disqualify him on the basis of the house rules:

“Look at him! That’s not the way we play the game in America. And that tweeting is TOTALLY UNPRESIDENTIAL.”

(Problem is, they acted like it was THEIR house, but it belongs to all of us – they don’t get to dictate what the rules are.)

Even to this day I hear people – even Trump supporters – complain about the tweeting and wish that he would stop. But why should he?

How do you score in politics? By getting your message bringing enough people to your side of the argument, and Trump’s tweets are a game changer. You can continue to complain, if you like, but unless you want to make tweeting illegal, he’s going to continue to scoreboard the opposition.

The game has changed – best get with the program.

The release weekend for “Some Kind of Luck” has just finished:

Henry Jacob Dawes is a cab driver with an ear that keeps him out of trouble — until he has a run-in with someone who has a different kind of luck.

“Some Kind of Luck” is a speculative fiction short story that grew out of the premonition I have on an almost daily basis that I’m going to be in an automobile accident and suffer blunt head trauma (don’t worry – the story is more optimistic than that – give it a read!)

“Some Kind of Luck can be found in all the usual places, including, but not limited to: 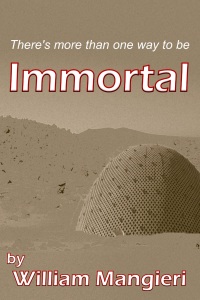 William Mangieri’s writing, including his previous publication “Immortal” can be found in many places, including:
• Smashwords:  https://www.smashwords.com/profile/view/NoTimeToThink
• His Amazon Author page:  http://www.amazon.com/-/e/B008O8CBDY
• Barnes & Noble:  http://www.barnesandnoble.com/s/william-mangieri?store=book&keyword=william+mangieri
• Createspace (if you prefer physical books):  https://www.createspace.com/pub/simplesitesearch.search.do?sitesearch_query=william+mangieri&sitesearch_type=STORE
To CONNECT WITH HIM (and LIKE and FOLLOW), go to
• His site on WordPress:  https://williammangieri.wordpress.com
• “William Mangieri’s Writing Page” on Facebook at:  http://www.facebook.com/NoTimeToThink
• His Goodreads author page:  http://www.goodreads.com/author/show/6893616.William_Mangieri
• Or on twitter: @WilliaMangieri