Native is a funny word. When we talk about native speakers, we mean people who have been exposed to a language since close to birth and have spoken it since they could speak; it’s native to them. To expand a little further, native is something that’s with a person from their beginning – not something they’ve acquired later in life.

In our need to forever label people in groups, the numerous tribes that were living in North America when Europeans first arrived are now called Native Americans. Why is this? I would think people who are identified as Native American would prefer to be called Crow, or Apache, or Sioux, or whatever their tribal group is.

We are very shortsighted historically. Europeans arrived on this continent around five-hundred years ago, and so whoever was there then were considered NATIVE to the continent. But my understanding is that those NATIVES were not originally in North America – they crossed a land bridge from Asia.

Do you think the French consider the Gallic Celtic tribes as Native French? How far back do we want to go? Perhaps Homo Erectus should be considered Native Europeans, since they were there before they were overrun by Homo Sapiens?

BTW – what country was founded without conquering or oppressing someone? (Not saying it’s right, just reality.) What country is REALLY run by the original occupants?

NATIVE has a meaning, but in the context of who was here first, it seems to be highly subjective, which means it has no real value as a label. When talking about people, I’d rather stick with the definition “belonging to a person’s character from birth rather than acquired; innate.” This means that the definition of NATIVE AMERICAN should be something like:

A person born in the U.S.

(as unfair as it may seem to Canada and other nations in this hemisphere, when the world talks about America, they mean the country of the United States; and Native United Statesians seems a bit awkward.)

Was there a point to all this? No, just meandering (Hey! it’s there in the title.) 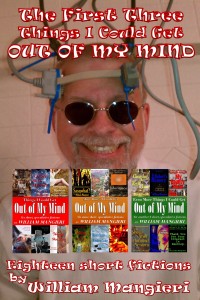 There are 11 days left in the preorder campaign for The First Three ‘Things I Could Get OUT OF MY MIND’. This is a collection of my first three OUT OF MY MIND collections (a total of eighteen short stories in all.) The release date is April 7th, but you can PREORDER it now through then at a REDUCED PROMOTIONAL PRICE of 99-cents (such a deal!), and is available at several online sellers, including, but not limited to: 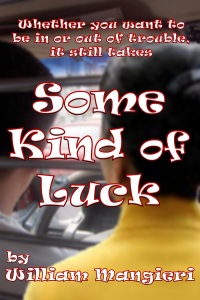 William Mangieri’s writing, including his latest publication “Some Kind of Luck,” can be found in many places, including:
• Smashwords:  https://www.smashwords.com/profile/view/NoTimeToThink
• His Amazon Author page:  http://www.amazon.com/-/e/B008O8CBDY
• Barnes & Noble:  http://www.barnesandnoble.com/s/william-mangieri?store=book&keyword=william+mangieri
• Createspace (if you prefer physical books):  https://www.createspace.com/pub/simplesitesearch.search.do?sitesearch_query=william+mangieri&sitesearch_type=STORE
To CONNECT WITH HIM (and LIKE and FOLLOW), go to
• His site on WordPress:  https://williammangieri.wordpress.com
• “William Mangieri’s Writing Page” on Facebook at:  http://www.facebook.com/NoTimeToThink
• His Goodreads author page:  http://www.goodreads.com/author/show/6893616.William_Mangieri
• Or on twitter: @WilliaMangieri