For Fractured Fragment Friday, since I’m currently working on my sixth AND seventh Herc Tom, Champion of the Empire stories, we’ll move onto the fifth Herc Tom tale – “Imperial Purrogative”: 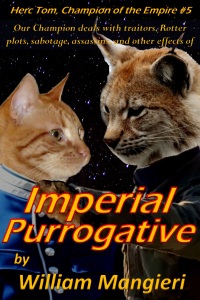 I was heading to my quarters when I felt a twitch in my whiskers. That was when I noticed that the Lynx was following me.

He was in the uniform of a Communications Specialist, but he didn’t walk like one. Mind you, we all have a supple gracefulness that’s part of what makes being feline a treat, but we’ll let up some to stretch out and relax. The Lynx moved like he was always on the hunt, taut and ready to spring on his prey. I could hear it in the way he followed me – or more specifically, I couldn’t hear it, he was so smooth. He might have caught me unawares if I wasn’t already on edge.

I turned on him in the corridor outside my quarters, my mouser already drawn.

“That will be far enough,” I said.

“Oh dear,” he said casually, as he leaned against the bulkhead and inspected his claws.

There was a lot of tension in that casualness, and I kept waiting for him to spring as I activated my comm.

I would have said more, but the press of cold steel against each side of my neck surprised me, and I wasn’t quite sure what to say next. There was also this fetid, overpowering odor. Rotters – I could hear their wheezing behind me. I wondered if that was what had made my whiskers twitch in the first place, before I was distracted by the Lynx.

“Let me help you with that,” he said.

He strolled toward me and pinched my mouser from my paw with two very sharp claws.

I had kept it with me throughout my service, and had made use of it during my escapes from both Lamia and the Rainbow Caverns.

“It is a nice piece, but I don’t believe she would want you armed,” he said.

So, I wasn’t to be killed – at least not yet. The rotters yanked my paws behind my back and tied them firmly together, and then manacled my legs. I took advantage of the opportunity to assess the situation. I recognized one of the rotters from my encounter with the Rotter Dame on Ramses; I assumed the Dame was the “she” that the Lynx was referring to. There were four filthy rotters wielding their preferred swords and knives as well as a couple of blow guns, plus one experienced feline assassin against me, Herc Tom, Champion of the Empire with both paws behind my back. I will admit that the odds didn’t seem to be in my favor. If I could just stall…

“Really? You’re just going to turn me over to the Rotter Dame? Wouldn’t you rather have a go at me yourself?” I asked.

“An honorable cat would allow his foe a chance to defend himself.”

Prince Octavio was standing in the corridor, still wearing his flight suit – he must have come directly from patrol. He was holding a telescopic sword – the type some fighter pilots liked to carry in case they found themselves planet-bound. I could have used one back on Lamia, but I had done alright with my mouser.

The Lynx tensed, but this wasn’t the tension of a cat about to spring into action. He froze, his claw still at my throat, and I could tell he was thinking through his options.

“You should not be here, Captain Octavio,” he said.

So he knew who the Prince was, but chose not to call him out as such. Why?

“And yet I am here. I need a word with the Colonel, there, so if you would just release him…” Octavio said.

“No – he is ours!” one of the rotters snarled, and I felt steel against my neck again.

“Careful Riggler, she wanted him alive. It wouldn’t do to disappoint her, now, would it?” the Lynx asked.

“No, it wouldn’t,” Riggler hissed.

The Lynx withdrew his claw from my throat and turned slowly to face the Prince.

“As you can see, my associates will not be deprived of their prize. You had best leave,” the Lynx said.

He advanced slowly up the corridor toward us. I knew that the Prince excelled as a swordsman – another of those traditions of the nobility that had been adhered to in his training. In close quarters against four sword wielding rotters he would acquit himself well, but that didn’t account for the Lynx whom, whatever other weapons he had, was also holding my mouser. The Prince didn’t have a chance. I thought to warn Octavio of this, except the situation was obvious. I was also puzzled that the Lynx hadn’t simply used my mouser to drop him, and I suspected it wasn’t merely professional pride or courtesy. The Lynx was being very obliging for someone who wasn’t giving ground.

“Who is this arrogant fool? He acts like he thinks he’s king,” one of the rotters whispered.

They shoved me to the ground – not the most advantageous viewpoint – as they rushed past to engage Octavio. I twisted my paws around and tried working my claws into the bindings while they were otherwise occupied.

“Stand back!” the Lynx shouted.

He had my mouser out, but to my surprise he had it pointed at the rotters, not the Prince. The rotters halted, but the prince continued approaching cautiously.

“Take the Colonel as agreed and be gone,” the Lynx said.

“Our Dame would be far more pleased with both,” Riggler said.

He signaled the two rotters to the rear, who were ready with blow guns. The Lynx managed to take out one of the darters, but I saw a puff of bright red bloom on the Lynx’s neck.

He fired off another beam as he slumped to the floor, and this hit the rotter beside Riggler in the leg. By this time Prince Octavio had reached us, and with the Lynx out of the way engaged with Riggler. There was some fine interplay between Octavio’s sword and Riggler’s paired blades. The Prince winged him so that his left arm swung uselessly at his side; I know Octavio would have maintained the upper paw if he hadn’t been felled by another of the red feathered darts.

The remaining darter took hold of Octavio’s arms, and Riggler and the limping rotter did what they could to help him drag the Prince up the corridor.

“What about him?” the limper said as they struggled past me.

“Let’s get this one to the pod and then we’ll come back for him,” Riggler said.

“You don’t need to –” I said before I heard the fwit and corresponding thwok as the dart bit into my thigh.

It only stung briefly, and then the numbness spread from there. I remember muttering before it totally shut down my brain:

“Imperial Purrogative” is available at several online retailers, including, but not limited to:

Time to start catching up on Herc Tom, so you’ll be ready for “Cats Out of the Bag.” Just saying…

William Mangieri’s writing – including his many collections, such as The First Three ‘Things I Could Get Out of My Mind’ – can be found in many places, including:
• Smashwords:  https://www.smashwords.com/profile/view/NoTimeToThink
• His Amazon Author page:  http://www.amazon.com/-/e/B008O8CBDY
• Barnes & Noble:  http://www.barnesandnoble.com/s/william-mangieri?store=book&keyword=william+mangieri
• Createspace (if you prefer physical books):  https://www.createspace.com/pub/simplesitesearch.search.do?sitesearch_query=william+mangieri&sitesearch_type=STORE
To CONNECT WITH HIM (and LIKE and FOLLOW), go to
• His site on WordPress:  https://williammangieri.wordpress.com
• “William Mangieri’s Writing Page” on Facebook at:  http://www.facebook.com/NoTimeToThink
• His Goodreads author page:  http://www.goodreads.com/author/show/6893616.William_Mangieri
• Or on twitter: @WilliaMangieri