As a writer, I am cautioned not to talk politics – I will alienate potential readers of my fiction. As any of you who have stumbled across my blogging have noticed, staying non-political has been very hard for me. Aside from my interest in politics, EVERYTHING is political nowadays, and it affects me – not only as a person, but as a writer.

As I was trying to find a market for “Date Night”, I happened upon a market that I’ve submitted to before – let’s call them MAGAZINE A (I could have sworn they were open, but I kept bouncing around the links on their site and never found the actual SUBMIT spot – but that’s neither here nor there… – it’s going to take me a couple of paragraphs to build ) I’ve run into markets over the years that have stressed that they encourage people from underrepresented groups to submit.

When I first ran across this, I considered it to be an assertion that the publisher wanted writers from all demographics to feel welcome – that ALL would be treated fairly (and to avoid any accusation that the publishers were bigots.) Over the years, though, the tone changed, to where it seemed more and more to express a PREFERENCE for writers from certain groups, and through either the tone of their guidelines, or the upcoming special issues they posted that were EXCLUSIVE to underrepresented groups, I go the sense that my submitting to these publications would be pointless. (For those of you who don’t know, I’m an old white guy; don’t see a lot of submission calls for those, do you?)

To return to my attempt to submit to MAGAZINE A… As I was rereading their submission guidelines, I was struck by several references to a term I’ve never seen before: SENSITIVITY READS. There was no explanation of what a sensitivity read is, so I searched the internet and discovered:

“A sensitivity read is an evaluation of a manuscript, usually one that touches upon characters and experiences of a marginalized group of people, that is performed by someone within that group to bring attention to potential inaccuracies, biases, and reinforcements of harmful stereotypes.”

In essence, MAGAZINE A suggested that short fiction receive a SENSITIVITY READ prior to submission (at the author’s expense) so that any potentially INSENSITIVE material could be altered or expunged. Exactly what group would the sensitivity read need to focus on? Who might I trigger? In the modern-day environment of micro-aggressions and easily triggered and offended masses, who WON’T I offend? (I suspect that I am currently offending the fledgling community of SENSITIVITY READERS with this post.)

Seriously, though – this is the kind of thinking that gets The Adventures of Huckleberry Finn banned from school libraries. Doesn’t anyone understand that part of the reason we have fiction is to help us understand people who aren’t like us – including reprehensible human beings. There’s a movie I’ve been hearing advertised recently (The Best of Enemies – yes, I know it’s supposed to be based on a true story, not fiction, but bear with me) in which I’m sure Sam Rockwell says several things that would be offensive to Black viewers (or is it African American now? I can’t keep track…) I wonder how a SENSITIVITY READ would affect that story. It would probably clean up the clansman’s words and deeds so much that the audience would wonder what the big deal was, and why they were supposed to find him reprehensible.

If I had been able to find the SUBMIT button, I still would have submitted “Date Night” (there are only two characters – a female witch and a male demon) in the hopes that I had steered clear of triggers, but how could I be sure without finding a sensitivity reader from each group (male demons ARE under-represented, aren’t they?)

Good fiction is a mirror – a way of looking at real life and people and seeing it all – both the nobility, the seamy underbelly. If we have to watch our words so carefully that no one is offended, how can we ever make an honest and clear connection with others? Just saying… 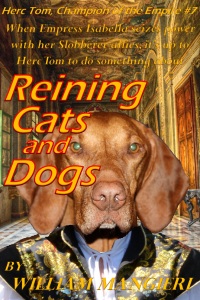 can be found in many places, including:
• Smashwords:  https://www.smashwords.com/profile/view/NoTimeToThink
• His Amazon Author page:  http://www.amazon.com/-/e/B008O8CBDY
• Barnes & Noble:  http://www.barnesandnoble.com/s/william-mangieri?store=book&keyword=william+mangieri