“Behind the 8-Ball” came from an image in my mind of a body being carried by group of suited astronauts on a moonscape, within sight of a green/blue planet. Then I worked backwards – I had to figure out why he was there, and decided he was an “explorer” sent through a wormhole to find a new world. He found it, transmitted back to base, but couldn’t get there – he saw the promised land from afar and died alone and unable to get there (hence I named him Moses.) But how would he send the all-clear back to humanity? I used my very rudimentary understanding of entanglement to create an unusual and unlikely method.

Humanity opens a gate into the unknown, but they need proof their new world is on 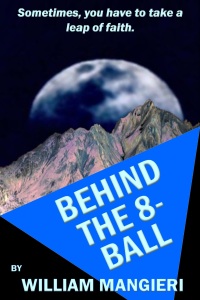 the other side. Moses can provide that proof, but how could anyone besides his wife believe him? Take a leap of faith with Moses and read “Behind the 8-Ball.”

Moses Thompson stared into the cold, dark sky filled with stars and sighed heavily; the chilled mist of his breath hung in the air like his frustration. Vlad Tepes was not much more visible than Polaris now, but in six months it would dominate the sky. And after that…

Statistical analysis dictated that there were habitable worlds out there; none of them were within reach of current tech. The scientific community (including Moses’ wife Portia) trusted Dr. Huffnagle’s theories of Planetary Detection Through Hyperspace Distortion, but both they and the powers that be wouldn’t commit the Earth’s limited supply of exotic matter to lock down the wormhole without firm proof that it led to a viable planet. The probes that they sent through Dr. Huffnagle’s most promising coordinates had sent back nothing, which left humanity to creating random wormholes in desperation. But this solved nothing; with thirty-nine separate holes, there still wasn’t a peep about the other side from any of the probes.

No one really knew why they had lost contact, but Portia believed that the probe’s radio signals couldn’t find their way back to Earth on their own – that it wasn’t possible for the signal to backtrack along the path the probe had navigated through the wormhole. That meant communications were traveling over immense distances and may never be heard in our lifetimes. Certainly not before Vlad Tepis’s arrival put an end to life on Earth as we’d known it. Her team had equipped the latest probe to test her theory on Dr. Huffnagle’s original hole; they would be accompanying the probe to the station to witness the result.

The fleet was ready to take humanity to a home; not all of humanity, there was only enough time for a chosen few to be sent through, to be certain that Humanity had a future. They needed reliable proof that there was a planet for the fleet to colonize at the other end; there would only be one chance.

The prospects didn’t look good. Moses focused on his feelings, until he felt the tickle inside his skull, just above his right ear, which told him he had toggled the 8-Ball. He walked back into the house, looked in on their sleeping five-year-old Siarah as he passed by her room, and opened the door to Portia’s home office, where she sat holding the Magic 8-Ball Moses had been given on his fifth birthday.

“Yes. That makes one hundred out of one hundred,” she said, with the same solemnity she would have used for any other scientific proof.

Portia hadn’t broached the topic of the Magic 8-Ball with her colleagues; you would think that theoretical physicists would be open to exploring any possibility, but they could be as closed-minded as anyone, and no amount of testing would have satisfied them. Her lead position on the team had gotten her family a place in the colonial fleet; it would be up to Moses to help them find their way to a new home.

“I wish it didn’t have to be you.” Portia said. “There should be some other psychic out there we could use.”

“I’m not psychic,” Moses said. “There aren’t any psychics as consistent as I am.”

“True enough. Some odd entanglement, then,” she said. “That would put it right in Huffnagle’s area of expertise, but he’d never buy it.”

Maybe it was that the casual, almost comical essence of the old novelty device just seemed more natural to Moses’ eccentric mind. Maybe it was just that he’d developed an affinity to a toy he’d had by his side since he was five. Whatever the reason, Moses was definitely linked with it.

Was it destiny? he wondered.

SIGNS POINT TO YES floated to the 8-Ball’s surface.

Portia smiled at the 8-Ball as she set it down on her desk, then took Moses by the hand and led him down the hall.

“I’ll start with REPLY HAZY TRY AGAIN, then CONCENTRATE AND ASK AGAIN. The next answer will be the final one – the one that will tell you we’ve succeeded. If we’ve succeeded.”

They stood in Siarah’s doorway and held each other as they watched her sleep.

Moses Thompson stared into the cold, dark sky beyond Dr. Huffnagle’s docked shuttle and sighed heavily; the chilled mist of his breath fogged the station porthole. He checked the red indicator on the door lock for what felt like the fiftieth time.

What’s taking her so long?

Then the light turned green and he heard the click as the lock disengaged. Moses’ sweaty hand slipped off the handle as he opened the hatch – he stuck his arm in the gap to keep the door from re-latching. Moses slipped into the tube and shut the door quietly behind him and hurried through the corridor to the docked ship and sealed himself inside.

The controls were positioned just as they were on the simulator; it would have been more reassuring if he’d been able to actually test fly one of these, but it would take months of serious training to reach that level of certification, and they didn’t have months.

He glanced at the note Portia had given him the night before and switched the comm to the private channel she had set up.

“Seven minutes until we reopen the wormhole; then they can’t afford to close it,” Portia answered. “Don’t launch until then.”

He could see the drum-like, dual stage probe floating out there – it was the only craft that would be allowed closer to the portal than the station was; the probe with her team’s latest modifications to transmit through the hyperspace that had thwarted them on each of the previous attempts. Stage One would remain inside the border to act as a relay, while Stage Two continued through to the other side.

Who knew – the latest modifications might work, after all, so it was still worth trying. They had as much reason to believe that his failsafe would work.

We always need one last chance, no matter how crazy it is. No, I mustn’t think that way. Stay positive.

He locked the shuttle’s autopilot onto Stage Two’s distinctive signal, and then put on the pilot’s pressure suit.

“Stand by – patching you into the final countdown,” Portia whispered over the comm. “Be safe.”

“I love you both,” Moses said.

“…five, four, three, two, one,” the automated feed echoed in the shuttle.

Moses could see the distortion in the space between the focal generators as the hole opened – a true nothingness that obscured the stars beyond. He saw the probe’s boosters fire a short burst, and it began drifting toward the blackness of the portal. He flipped the switch to uncouple his mooring and launched the shuttle away from the station.

The reaction from base monitoring was almost instantaneous.

Moses ignored the station’s control tower and accelerated toward the probe. He could feel the wormhole’s pull now; it was as though his sinuses were being drawn forward through his eyebrows, an infinite number of threads attached to his fingers, his knees, his stomach, his heart – all straining in one direction.

“T75H, your presence may damage the portal. Turn back now or we will fire!”

The station did have weaponry of a sort – small rockets and lasers to defend against incoming space debris. He and Portia had considered that they might use them on the departing shuttle, but they had hoped the station would be hesitant to fire on the world-renowned physicist.

Then Moses heard the pompous voice of Dr. Huffnagle over the comm.

“Whoever you are, you have no right to do this. Return my shuttle at once!”

Moses saw the stages separate as the probe stretched across the boundary of the hole; Stage One teetered on the edge of the gap as Stage Two disappeared inside. He fired his thrusters, and along with the jarring acceleration he also felt the impact as a rocket struck, and the shuttle lurched sideways toward the portal, its thrusters disabled. Warning lights flashed, and he heard the unmistakable hissing of air escaping from the cabin. He pulled his helmet on and secured it as a sucking numbness invaded his mind and drowned out all awareness as he passed through the wormhole.

So, what does Moses find on the other side of that wormhole? “Behind the 8-Ball” is a sci-fi short story, and is available at several online retailers, including, but not limited to:

“Finding Sanctuary” is also included in the collection More, And Yet Still Even More Things I Could Get OUT OF MY MIND (If you purchase the collection on Smashwords with coupon code BT87H you will receive a 67% discount – that’s only 99-cents for SIX stories – such a deal!): 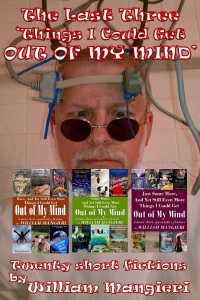 Which is itself included in the mega-collection The Last Three ‘Things I Could Get OUT OF MY MIND’ : 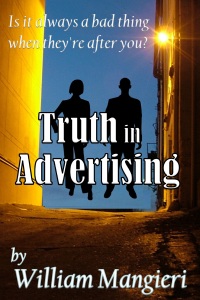