Yesterday (Sunday), Punxsutawney Phil emerged from his den (actually, he was extracted), and could not find his shadow (I’m not surprised – I have a hard time seeing anything when I first get out of bed in the morning, especially if I’m awakened against my will. I’ve heard that those fun people from PETA want to put a stop to this. Of course, then Phil might lose his sponsorship and all the free food he’s been getting – I wonder how HE feels about PETA using him for their politics? Hey, PETA – don’t ruin my gig!)

From this, we now know that we will have an early spring. I live in Texas, and we’re still waiting for winter to start here, although my weather app IS showing possible snow for Wednesday (but hey, it’s Texas – that will change.) If Phil tried to look for his shadow here, I’m not sure he’d get the same result. We need our own groundhog. Or maybe an armadillo…

I remember the 1993 Groundhog Day movie, in which Bill Murray’s character relives the same day over and over again, except once he catches on to the loop that he’s in, he stops living it the same way and grows from the experience. That’s not the way most of us change – it’s usually forced on us from the outside, and we fight tooth and nail to keep it from happening (I don’t know how hard Phil was trying to keep from being made to look for his shadow, but it happened anyway, dint it?)

We are all works in progress, but sometimes we get caught in a loop – doing same thing, learning the same lessons over & over again (well, not learning them, perhaps – just living through them instead. What’s the definition of insanity?) (Doing the same thing over and over and expecting things to be different.)

I have fooled myself too many times in my life – thought I had grown, then slapped in the face with the reality that I’m still the same person, failing at the same things. Groundhog Day can be a warning (or at least a touchpoint) for those of us who need to change.

Don’t be like Phil – come out of your den before someone or something else makes you. Just saying…

Swordsmaster – my first novel – is ready for your reading pleasure, so give it a read, won’t you? 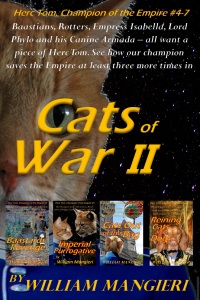 Champion of the Empire tales) can be found in many places, including, but not limited to:
• Smashwords:  https://www.smashwords.com/profile/view/NoTimeToThink
• His Amazon Author page:  http://www.amazon.com/-/e/B008O8CBDY
• Barnes & Noble:  http://www.barnesandnoble.com/s/william-mangieri?store=book&keyword=william+mangieri