This week we visit the second of my Detective Jimmy Delaney stories: “Mixed Signals.”

As I’ve said before, I never intended to write a SERIES of Detective Jimmy Delaney stories. I had written “In a Flash” as a standalone short story. I expected it to remain that way, but something about Jimmy just stuck with me (similar life pressures, perhaps?), and I began to wonder what was going to happen to him next.

Then I was thinking about the possibilities of jacking with a variety of devices in our expanding “internet of things”; I went beyond someone hacking your house thermometer, to what could happen with more personal medical devices, and Jimmy popped up again with “Mixed Signals.”

Nothing was going Jimmy’s way, lately. Jill had moved to Portland and filed for divorce. Sure, Jimmy should have never gotten that illegal jack, but how was he to know that the Yons would use it to make him kill Eddie?
Then the prosecutor thought Jimmy’s credibility was shot and wouldn’t put him on the stand at their trial. Even if he had been drugged part of the time, the jury would have still believed him. It wasn’t like they could prove that he’d been an accessory. They’d busted him down from detective, anyway.
And then he’s suspected in the local football quarterback’s murder. Things couldn’t get any worse – or could they? Find out – read Mixed Signals.”
“Mixed Signals” is a novelette, and the sequel to “In a Flash”, and is also available in “Broken Down: Detective Jimmy Delaney Collection #1.”

And Here’s This Week’s Excerpt

Spending your time dealing with the scum of the city doesn’t build the kind of connections that help with a job search – at least not the kind of jobs that keep you on the right side of the law. Jimmy sat at the end of the bar at Kaczmarek’s sipping his beer and staring up at the television. They were running football highlights from the Bulls’ loss last night. He set his empty mug down and signaled Pete for another.

Pete brought it over, then watched the Bulls’ quarterback scramble for a score. 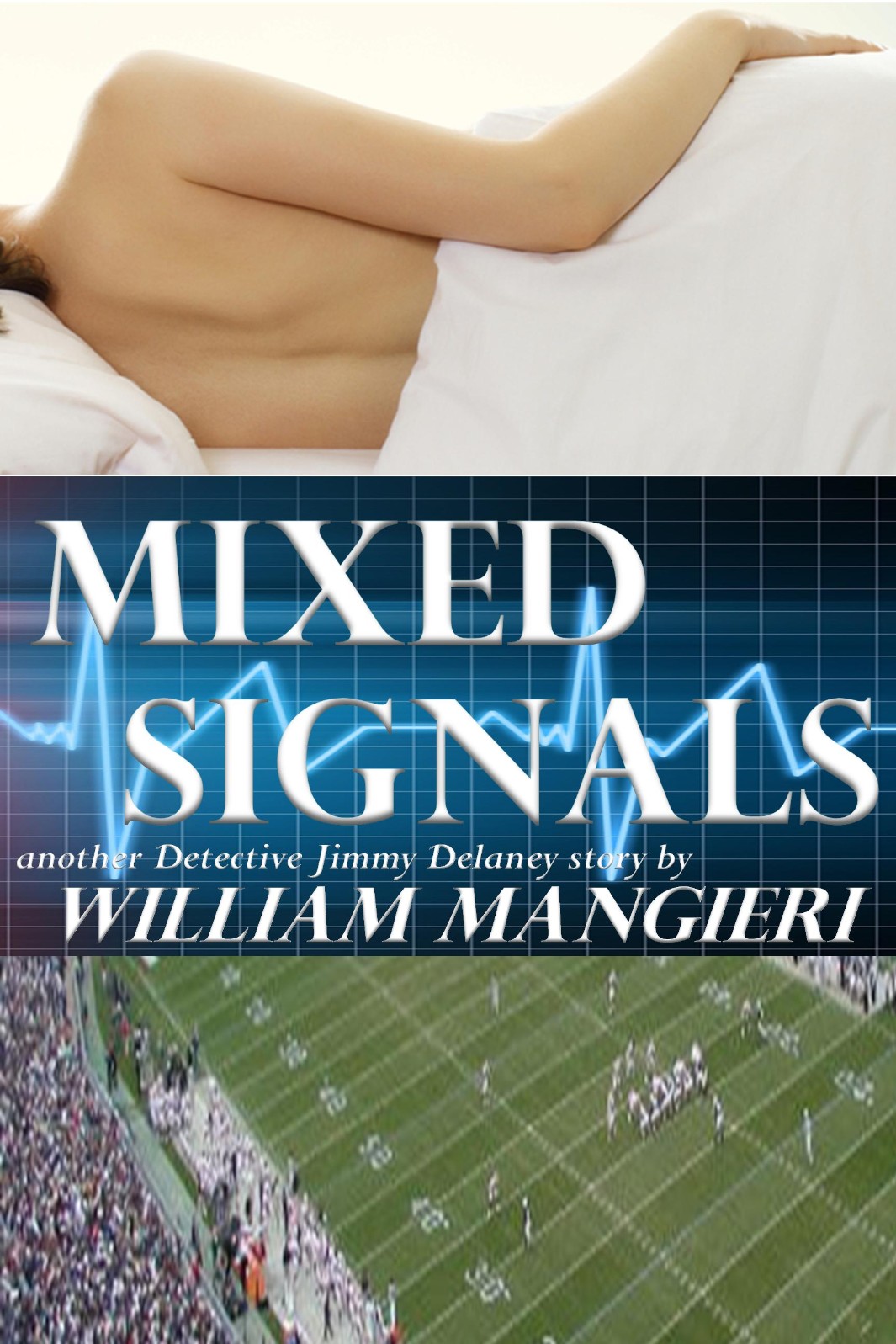 “Brandon Simms,” he said, “now that’s a name you’ll be hearing for a long time.”

“Simms almost carried them again,” said a patron a couple of stools over. “With him, I can’t see them out of the playoffs for the next ten years.”

“That’d be good for Mrs. Danford,” Pete said. “She’ll finally have the franchise her husband always wanted, rest his soul. And to think, the kid wouldn’t be playing if Carson hadn’t got crippled in that freak hunting accident with her son Roger.”

“Doesn’t matter how good the quarterback is if those guys can’t keep the other team out of the end zone,” said Jimmy.

“Not a lot out there for a fired cop – at least not with anyone who watches the news. I think I better set my sights on flipping burgers.”

“No, all those years of police work are worth more than that,” said Pete, then he pulled out his cell and started typing. “I know they’re looking to hire more security at the stadium. I’m sending you Max’s number.”

Jimmy’s cell beeped. He glanced at the screen.

“Hey, I know I made a mistake sponsoring him into the country, but he’s legit now!”

“That’s beside the point. You think he’s forgotten that I was the one who sent him up the river?”

“No, of course not,” Pete said, still texting. “But he’s always telling me that his time in prison was the best thing that ever happened to him.”

“Yeah, right,” Jimmy shook his head, “so of course, he’s so full of gratitude that the first thing he’s gonna say is ‘Jimmy, I am in debt to you.’ Jeez, Pete, are you back on the sauce?”

“No way, man,” Pete said, holding up his fingers, “Seven years sober. Besides, you’ll get in free to the games. They might still make it into the playoffs, and from there, who knows?”

Pete’s cell chimed. He smiled, and showed it to Jimmy.

“SURE SEND HIM OVER”

Jimmy sat across the desk from Max in his office at Ezra Danford Stadium. He glanced down at the plaque that read Maksymilian Kaczmarek – Head of Operations, then back up at the big, grinning Pole behind it.

“For taking you in for racketeering?”

“Only because of the way I gathered the evidence.”

“None the less, if I had not gone to the kić, and my life had remained on the same trajectory, who knows where I would be now? Perhaps at the bottom of the river. Instead, I was afforded time to reflect, to appreciate the errors of my ways, and to focus on the person I wanted to be.”

“How…” he started to ask, but Max finished it for him.

“How did I rise to my position? Always thinking, always asking questions, are you not? That is why you are so good,” he said, still smiling. “I was in the library reading a book on proper grammar, so I could finish my MBA, and I heard another inmate muttering about the Bulls’ season, and you know how I have always been a huge fan, and we became friends. It happened that he was the owner’s son, so now I am here.”

“You met Roger Danford in prison?”

“His anger with his mother for sending him to kić was great, but I told him she was probably trying to teach him a lesson about the drugs. Once he was released, he went to work for her as the GM. Family is family, as you know. And when I came here after my stay in the kić, he recognized how valuable I could be and made me head of operations. You know how the world works, Jimmy. It is not only what you know, but who you know. And you know me.”

“Somehow, it never occurred to me that’d be an asset.”

“Well, you know me, and I am here, so here we are. Of course, you will only be a member of security, but you will have access to places that I will not. I do not complain,” he said, “I understand where they are coming from. The league is big money, and they were never happy with organizations such as mine that made money off them without giving them a percentage.”

“They’re gonna give me clearance? With everything that’s been written about me?”

“Uh, uh, uh,” Max said, waggling his finger, “In the land of the free, innocent until proven guilty, my friend. I do not believe you have done half of what they say you did, and I know from my personal experience that you were a good cop. Otherwise, the money I tried to give you would have kept me out of the kić.”

Max picked up his phone and pushed a couple of buttons. “Warren, I am sending over your new security team member. Show him his place.”

He hung up the phone and smiled at Jimmy. “I am sure Warren will see it the same way as me. I mean, as I.”

Max was right, of course. Warren glanced at Jimmy, grunted over his resume, muttered something about “meddling”, and Jimmy was in.

But maybe Jimmy has gotten IN with someone it would be healthier not to be associated with.

“Mixed Signals” is available at many online retailers, including, but not limited to:

The story is also available in Broken Down: Detective Jimmy Delaney Collection #1, which is again available at – and still not limited to – the following retailers:

Honest ratings and reviews are, as always, appreciated.

For  information and links for my current promotions (including the FREE starter eBooks for my Herc Tom, Champion of the Empire series and my Detective Jimmy Delaney series), look HERE on my CURRENT BOOK PROMOTIONS page.