I joke a lot about being immortal (well, most people who hear me think I’m joking, so let’s go with that.) Healthwise, I’ve been very lucky. I am seldom ill, and when I do succumb to illness, I’m over it in a couple of days, versus the week or two that others get to enjoy. My couple of colonoscopy preps have been a picnic, compared to the hours of discomfort that others endure. I’m sixty-two, but I don’t feel it, and even though I can’t run like I used to, I can as easily attribute that to being out of shape as to my “advanced” age.

Well, mortality decided to give me a pounding this week.

It started with my insurance agent informing me that there were some red-flags in my blood-work that the life insurance underwriters didn’t like. How could that be? I couldn’t have anything wrong with me – probably just the ibuprofen messing with the results. I set up an appointment with my doctor for physical and a retest.

While waiting for my appointment, my day-job employer decided to add some stress to my life by holding another round of layoffs, and although I survived the cuts as I did last year, I am now carrying the usual survivor’ guilt (and wondering when the axe will fall next.)

My physical was okay for the most part, and even though my blood-work came back better than it had been, I have learned that the tinnitus I’ve been experiencing for the last couple of months includes some hearing loss (so I guess all those annoying mailers I’ve been getting about hearing-aids are more apropos than I realized; I hope the ones about “adult living” and cremation services aren’t becoming more relevant, too.) I’m going to visit an ENT specialist to find out what’s going on with my ear.

That is, if the sudden bout of the flu that’s hit me will let me make my appointment. I was feeling a little dizzy at the end of the week, and wondered if it had to do with the tinnitus. Or with the hearing loss. Or my elevated cholesterol. Or the TIA I had ten years ago, that my new doctor says is a harbinger of strokes to come. But it appears (at least for now) that the dizziness and disorientation is tied to the flu, which kept me in bed for most of Saturday and Sunday, and which seems destined to lay me up for at least another couple of days.

Normally, Saturday in bed would have been enough to get over it.

How can this be? I’m supposed to be immortal!

I’m struggling to type this, so I had best finish it up now and schedule it to post so I don’t miss my deadline. Deadline – now there’s a meaningful word for you.  I don’t know how you mortals cope. Just saying…

Up next for publication is another Herc Tom story – “Reining Cats and Dogs” (and lest you think I’m misspelling it, no – all three of the homophones – REINING, REIGNING, AND RAINING – apply.)

Empress Isabella continues to increase her hold on power with the help of her Slobberer allies. It’s up to our Champion of the Empire and his friends to do something about it.

“Reining Cats and Dogs” is a speculative fiction novelette (or NOVELLA, depending on whose scale you’re using), and is the seventh of the “Herc Tom, Champion of the Empire” stories, following “Purr Mission”, “Nipped in the Butt”, “Cat and Mouse”, “Baastards’ Revenge”, “Imperial Purrogative”, and “Cats Out of the Bag.” The release date is March 1, but it’s available at a promotional preorder price at several online retailers, including (but not limited to): 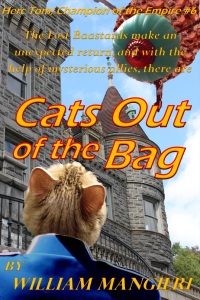 William Mangieri’s writing – including his most recent release “Cats Out of the Bag” – can be found in many places, including:
• Smashwords:  https://www.smashwords.com/profile/view/NoTimeToThink
• His Amazon Author page:  http://www.amazon.com/-/e/B008O8CBDY
• Barnes & Noble:  http://www.barnesandnoble.com/s/william-mangieri?store=book&keyword=william+mangieri

One thought on “Meandering Monday about You Mortals”